Blue tit – Cyanistes caeruleus
Eurasian blue tits, usually resident and non-migratory birds, are widespread and a common resident breeder throughout temperate and subarctic Europe and western Asia in deciduous or mixed woodlands with a high proportion of oak. They usually nest in tree holes, although they easily adapt to nest boxes where necessary. Their main rival for nests and in the search for food is the larger great tit.

The Eurasian blue tit prefers insects and spiders for its diet. Outside the breeding season, they also eat seeds and other vegetable-based foods. The birds are famed for their skill, as they can cling to the outermost branches and hang upside down when looking for food.

The small size of the Eurasian blue tit makes it vulnerable to prey by larger birds such as jays who catch the vulnerable fledglings when leaving the nest. The most important predator is probably the sparrowhawk, closely followed by the domestic cat. Nests may be robbed by mammals such as weasels and red squirrels, as well as introduced grey squirrels in the UK.

The successful breeding of chicks is dependent on sufficient supply of green caterpillars as well as satisfactory weather. Breeding seasons may be affected badly if the weather is cold and wet between May and July, particularly if this coincides with the emergence of the caterpillars on which the nestlings are fed. 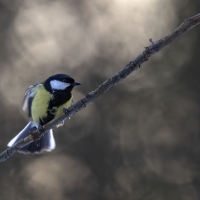 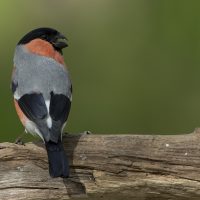