Blyth’s reed warbler – Acrocephalus dumetorum
is an Old World warbler in the genus Acrocephalus. It breeds in the Palearctic and easternmost Europe. It is migratory, wintering in Bangladesh, India and Sri Lanka.

This bird is named after the British zoologist Edward Blyth.

This is a medium-sized warbler, 12.5-14 cm in length. The adult has a plain brown back and pale underparts. It can easily be confused with reed warbler, marsh warbler and some of the Hippolais warblers. It is most like reed warbler but is greyer on the back, the forehead is less flattened and the bill is less strong and pointed. The sexes are identical, as with most warblers, but young birds are yellower below.

The habitat is different from the reed beds favoured by reed warbler or the rank vegetation of marsh warbler, this species choosing trees or bushes as songposts. Like most warblers, Blyth’s reed warbler is insectivorous, but will take other small food items, including berries.

In the breeding season, the best identification feature is the song, which is slow and repetitive, with much mimicry of other birds, punctuated with scales and typically acrocephaline whistles.

It sings like this
Recording from Xeno canto by Kalle Brinell 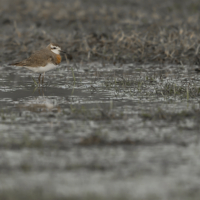