Common wood pigeon – Columba palumbus
The common wood pigeon (Columba palumbus) is a large species in the dove and pigeon family. It belongs to the Columba genus and, like all pigeons and doves, belongs to the family Columbidae. It is locally known in southeast England as the “culver”; This name has given rise to several areas known for keeping pigeons to be named after it, such as Culver Down.

The genus name Columba is the Latin word meaning “pigeon, dove”, whose older etymology comes from the Ancient Greek κόλυμβος (kolumbos), “a diver”, from κολυμβάω (kolumbao), “dive, plunge headlong, swim”. Aristophanes (Birds, 304) and others use the word κολυμβίς (kolumbis), “diver”, for the name of the bird, because of its swimming motion in the air. The specific epithet palumbus is derived from the Latin palumbes, “wood pigeon”. Juvenile birds do not have the white patches on either side of the neck. When they are about six months old (about three months out of the nest) they gain small white patches on both sides of the neck, which gradually enlarge until they are fully formed when the bird is about 6–8 months old (approx. ages only). Juvenile birds also have a greyer beak and an overall lighter grey appearance than adult birds.

In the colder northern and eastern parts of its Europe and western Asia range the common wood pigeon is a migrant, but in southern and western Europe it is a well distributed and often abundant resident.

ts flight is quick, performed by regular beats, with an occasional sharp flick of the wings, characteristic of pigeons in general. It takes off with a loud clattering. It perches well, and in its nuptial display walks along a horizontal branch with swelled neck, lowered wings, and fanned tail. During the display flight the bird climbs, the wings are smartly cracked like a whiplash, and the bird glides down on stiff wings. The common wood pigeon is gregarious, often forming very large flocks outside the breeding season.

It sounds like this
Recording by Jordi Calvet from Xeno canto 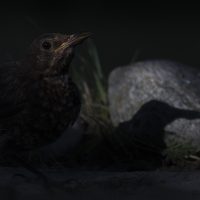