Fly orchid – Ophrys insectifera
is a species of orchid and the type species of the genus Ophrys. It is native to Europe and favors sites with alkaline soil. The name arises because its inflorescence resembles a fly, although it is dependent on wasps and bees for pollination. The plants use scent to attract male wasps and bees which pollinate the flowers as they attempt to mate with the flower. The scent released by the flowers mimic female sexual pheromones. In Sweden they are most common on Öland and Gotland. 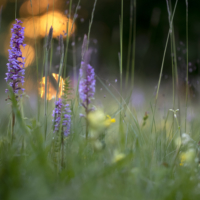