Goldfinch – Carduelis carduelis
Goldfinch is a small passerine bird in the finch family that is native to Europe, North Africa and western Asia. It has been introduced to other areas including Australia, New Zealand and Uruguay.

The goldfinch has a red face and a black-and-white head. The back and flanks are buff or chestnut brown. The black wings have a broad yellow bar. The tail is black and the rump is white. The female is very similar to the male but has a slightly smaller red area on the face. The goldfinch is often depicted in Italian renaissance paintings of the Madonna and Child.

On closer inspection male goldfinches can often be distinguished by a larger, darker red mask that extends just behind the eye. In females, the red face does not extend past the eye. The ivory-coloured bill is long and pointed, and the tail is forked. Goldfinches in breeding condition have a white bill, with a greyish or blackish mark at the tip for the rest of the year. Juveniles have a plain head and a greyer back but are unmistakable due to the yellow wing stripe. Birds in central Asia (caniceps group) have a plain grey head behind the red face, lacking the black and white head pattern of European and western Asian birds.[ The goldfinch’s preferred food is small seeds such as those from thistles (the Latin name is from Carduus, a genus of thistles) and teasels, but insects are also taken when feeding young. It also regularly visits bird feeders in winter. In the winter goldfinches group together to form flocks of up to forty, occasionally more. Goldfinches are attracted to back gardens in Europe and North America by birdfeeders containing niger (commercially described as nyjer) seed. This seed of an annual from South Asia is small, and high in oils. Special polycarbonate feeders with small oval slits at which the goldfinches feed are sometimes used.

It sounds like this
Recording by Eetu Paljakka from Xeno canto 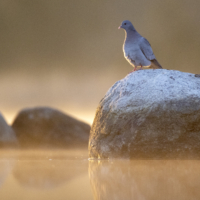