Great cormorant – Phalacrocorax carbo
known as the great black cormorant across the Northern Hemisphere, the black cormorant in Australia, the large cormorant in India and the black shag further south in New Zealand, is a widespread member of the cormorant family of seabirds. The great cormorant breeds mainly on coasts, nesting on cliffs or in trees (which are eventually killed by the droppings), but also increasingly inland. Three or four eggs are laid in a nest of seaweed or twigs. The great cormorant can dive to considerable depths, but often feeds in shallow water. It frequently brings prey to the surface. A wide variety of fish are taken: cormorants are often noticed eating eels, but this may reflect the considerable time taken to subdue an eel and position it for swallowing, rather than any dominance of eels in the diet. In British waters, dive times of 20–30 seconds are common, with a recovery time on the surface around a third of the dive time.

It sounds like this
Recording by Anon Torimi from Xeno canto 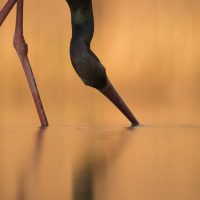