Greater scaup – Aythya marila
or just scaup in Europe or, colloquially, “bluebill” in North America, is a mid-sized diving duck, larger than the closely related lesser scaup. It spends the summer months breeding in Alaska, northern Canada, Siberia, and the northernmost reaches of Europe. During the winter, it migrates south to the coasts of North America, Europe, and Japan. The adult greater scaup is 39–56 cm (15–22 in) long with a 71–84 cm (28–33 in) wingspan and a body mass of 726–1,360 g (1.601–2.998 lb). It has a blue bill and yellow eyes and is 20% heavier and 10% longer than the closely related lesser scaup. The male has a dark head with a green sheen, a black breast, a light back, a black tail, and a white underside. The drake or male greater scaup is larger and has a more rounded head than the female. The adult female has a brown body and head, with white wing markings similar to those of the male but slightly duller. It has a white band and brown oval shaped patches at the base of the bill, which is a slightly duller shade of blue than the drake’s.

It sounds like this
recording by Peter Boesman from Xeno canto 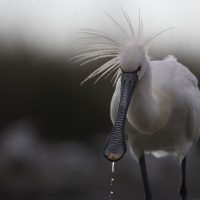