The grey-headed albatross – Thalassarche chrysostoma
also known as the grey-headed mollymawk, is a large seabird from the albatross family. It has a circumpolar distribution, nesting on isolated islands in the Southern Ocean and feeding at high latitudes, further south than any of the other mollymawks. Its name derives from its ashy-grey head, throat and upper neck.

Mollymawks are a type of albatross that belong to the family Diomedeidae from the order Procellariiformes, along with shearwaters, fulmars, storm petrels, and diving petrels. They share certain identifying features. First, they have nasal passages that attach to the upper bill called naricorns, although the nostrils of an albatross are on the sides of the bill. The bills of Procellariiformes are also unique in that they are split into between seven and nine horny plates. Finally, they produce a stomach oil made up of wax esters and triglycerides that is stored in the proventriculus. This is used against predators as well as an energy rich food source for chicks and for the adults during their long flights. They also have a salt gland situated above the nasal passage that helps desalinate their bodies, to compensate for the ocean water they imbibe. It excretes a concentrated brine from the nostrils.

The IUCN classifies this bird as endangered due to rapidly declining numbers in South Georgia which holds around half the world’s population. 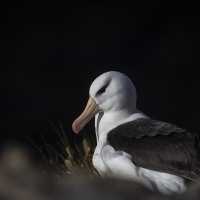 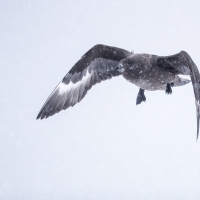