icterine warbler – Hippolais icterina
is an Old World warbler in the tree warbler genus Hippolais. It breeds in mainland Europe except the southwest, where it is replaced by its western counterpart, melodious warbler. It is migratory, wintering in sub-Saharan Africa. A fairly big warbler with a large head, broad based bill and long wings with a quite short square ended tail. The upperparts are greyish-green and the underparts are unifrmly light yellow. It has pale lores and a rather vague yellowish supercilium with a pale eye ring. Other distinguishing features include a panel on the folded wings formed by pale edges to the secondary feathers and tertiary feathers and the grey, sometimes bluish legs.

The icterine warbler has the most northerly and widespread distribution of the four Hippolais species, its breeding range extends from northern France and Norway through most of northern and eastern Europe, south as far as the northern Balkans mountains and Crimea mountains eastwards in a narrowing band to the River Ob. It has bred in Scotland recently but it is normally a passage migrant in Great Britain and Ireland.

It sounds like this
recording by Luca Giussani from Xeno canto 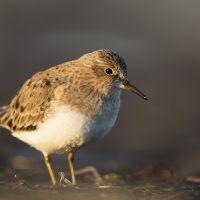 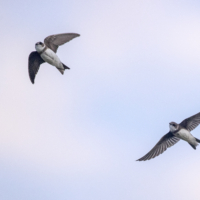