King eider – Somateria spectabilis
The king eider is a large sea duck that breeds along Northern Hemisphere Arctic coasts of northeast Europe, North America and Asia. The birds spend most of the year in coastal marine ecosystems at high latitudes, and migrate to Arctic tundra to breed in June and July. They lay four to seven eggs in a scrape on the ground lined with grass and down. The king eider is a large sea duck, measuring 50–70 cm (20–28 in) in length with a wingspan of 86–102 cm (34–40 in). Males are, on average, heavier than females, with a mean weight of 1.668 kg (3.68 lb) for males and 1.567 kg (3.45 lb) for females.[9] An individual bird’s mass can vary considerably from season to season—from as little as 0.9 kg (2.0 lb) to as much as 2.2 kg (4.9 lb). Like all eiders, the species is sexually dimorphic; the male is slightly larger and, in breeding plumage, much more colourful than the female. The male is unmistakable with its mostly black body, buff-tinged white breast and multicoloured head. The head, nape and neck are a pale bluish grey. The cheek is pale green. The bill, separated from the face by a thin black line, is red with a white nail and a large, distinctive yellow knob. Some tertials are curved up and form “spurs” along the back. Due to its large population and vast range, the king eider is listed as a species of least concern by the International Union for the Conservation of Nature. The king eider is one of the species to which the Agreement on the Conservation of African-Eurasian Migratory Waterbirds (AEWA) applies. 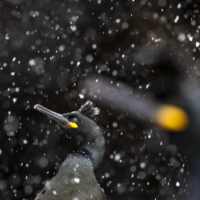