King Penguin – aptenodytesis  patagonicus
is a large species of penguin, second only to the emperor penguin in size.
King penguins eat small fish, mainly lanternfish, squid and krill. On foraging trips king penguins repeatedly dive to over 100 metres (300 ft), and have been recorded at depths greater than 300 metres (1,000 ft).

King penguins breed on the subantarctic islands at the northern reaches of Antarctica, South Georgia, and other temperate islands of the region.

The king penguin stands at 70 to 100 cm (28 to 39 in) tall and weighs from 9.3 to 18 kg (21 to 40 lb) Males are slightly larger than females.
The average weight of the king penguin is similar or just slightly higher than that of the largest living flying birds. At first glance, the king penguin appears very similar to the closely related emperor penguin, with a broad cheek patch contrasting with surrounding dark feathers and yellow-orange plumage at the top of the chest. However, the cheek patch of the adult king penguin is a solid bright orange whereas that of the emperor penguin is yellow and white, and the upper chest tends to be more orange and less yellowish in the king species. Both have colorful markings along the side of their lower mandible, but these tend towards pink in emperor penguin and orange in king penguin. 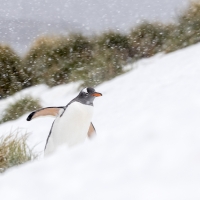