Mountain hare – Lepus timidus
also known as blue hare, tundra hare, variable hare, white hare, snow hare, alpine hare and Irish hare, is a hare that is largely adapted to polar and mountainous habitats. The mountain hare is a large species, though it is slightly smaller than the European hare. It grows to a length of 45–65 cm (18–26 in), with a tail of 4–8 cm (1.6–3.1 in), and a mass of 2–5.3 kg (4.4–11.7 lb), females being slightly heavier than males.[7][8] In summer, for all populations of mountain hares, the coat is various shades of brown. In preparation for winter most populations moult into a white (or largely white) pelage. 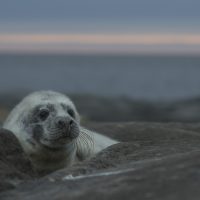