Purple heron – Ardea purpurea
is a wide-ranging species of wading bird in the heron family, Ardeidae. It is similar in appearance to the more common grey heron but is slightly smaller, more slender and has darker plumage. It is also a more evasive bird, favouring densely vegetated habitats near water, particularly reed beds. It hunts for a range of prey including fish, rodents, frogs and insects, either stalking them or standing waiting in ambush.

Purple herons are colonial breeders and build a bulky nest out of dead reeds or sticks close to the water’ edge among reeds or in dense vegetation. About five bluish-green eggs are laid and are incubated by both birds. The young hatch about four weeks later and fledge six weeks after that. The International Union for Conservation of Nature notes that the global population trend is downwards, largely because of the drainage of wetlands, but assesses the purple heron’s conservation status as being of “least concern”.

The call is a harsh “frarnk”, but is quieter and more high-pitched than that of the grey heron. It is generally a less noisy bird, though similar guttural sounds are heard emanating from the heronry. It is also less robust, and appears somewhat hollow-chested. Its head and neck are more slender and snake-like than the grey heron and its toes much longer. Unlike that bird, it often adopts a posture with its neck extending obliquely, and even nestlings tend to use this stance. 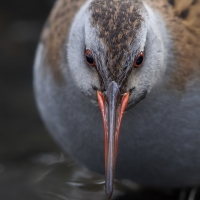