Red-necked grebe – Podiceps grisegena
is a migratory aquatic bird found in the temperate regions of the northern hemisphere. Its wintering habitat is largely restricted to calm waters just beyond the waves around ocean coasts, although some birds may winter on large lakes. Grebes prefer shallow bodies of fresh water such as lakes, marshes or fish-ponds as breeding sites.

The red-necked grebe is a nondescript dusky-grey bird in winter. During the breeding season, it acquires the distinctive red neck plumage, black cap and contrasting pale grey face from which its name was derived. It also has an elaborate courtship display and a variety of loud mating calls. Once paired, it builds a nest from water plants on top of floating vegetation in a shallow lake or bog.

The red-necked grebe is a medium-large grebe, smaller than the great crested grebe of Eurasia, and the western and Clark’s grebes of North America.[8][9] The adult of the nominate European subspecies is 40–50 cm (16–20 in) long with a 77–85 cm (30–33 in) average wingspan,[10] and weighs 692–925 g (24.4–32.6 oz).[10] In breeding plumage, it has a black cap that extends below the eye, very pale grey cheeks and throat, a rusty red neck, dark grey back and flanks, and white underparts. The eyes are dark brown and the long, pointed bill is black with a yellow base.

It sounds like this
Recording by Marcel Tenhaeff from Xeno canto 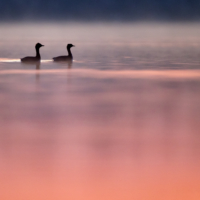