Rock shag – Phalacrocorax magellanicus
also known as the Magellanic cormorant, is a marine cormorant found around the southernmost coasts of South America. Its breeding range is from around Valdivia, Chile, south to Cape Horn and Tierra del Fuego, and north to Punta Tombo in Argentina. In winter it is seen further north, with individuals reaching as far as Santiago, Chile on the west coast and Uruguay on the east. The birds also breed around the coasts of the Falkland Islands

At a distance, the rock shag is a black and white bird, with head, neck and upperparts black and chest and underparts white. Closer up, the black areas vary from metallic blue to oily green, and are flecked with white in places. The legs and feet are a pink, fleshy colour, and the bare flesh around the beak and eyes is brick red. In breeding condition, there is a blackish though not very prominent crest on the forehead, and a distinctive white ear patch. There is even less sexual dimorphism than in most cormorant species, but males are 5%-10% larger on most size measurements. 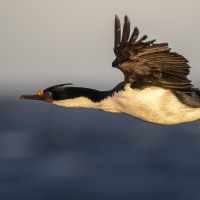 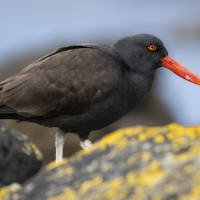