The Sabine’s gull – Xema sabini
also known as the fork-tailed gull or xeme, is a small gull. Its generic placement is disputed; some authors treat it as the sole species in the genus Xema as Xema sabini, while others retain it in the genus Larus as Larus sabini.

This species is easy to identify through its striking wing pattern. The adult has a pale grey back and wing coverts, black primary flight feathers and white secondaries. The white tail is forked. The male’s hood darkens during breeding season. Young birds have a similar tricoloured wing pattern, but the grey is replaced by brown, and the tail has a black terminal band. Juveniles take two years to attain full adult plumage. Sabine’s gulls have an unusual molt pattern for gulls. Fledged birds retain their juvenile plumage through the autumn and do not start molting into their first winter plumage until they have reached their wintering grounds. Adults have their complete molt in the spring prior to the spring migration, and have a partial molt in the autumn after returning to the wintering area, a reversal of the usual pattern for gulls.
They have a very high-pitched and squeaking call. 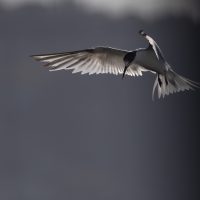