Six-spot burnet – Zygaena filipendulae
Zygaena filipendulae is a common species throughout Europe , except the Atlantic coast of the Iberian Peninsula, northern Scandinavia and the Great Russian North. It is also present in Asia Minor, through the Caucasus to Syria and Lebanon. This species can be found in meadows, woodland clearings, sea-cliffs and area rich in grasses and flowers, up to 2000 m altitude.

Zygaena filipendulae has a wingspan of 30–40 mm (1.2–1.6 in). The sexes are similar. The fore wings are dark metallic green with six vivid red spots (sometimes the spots are merged causing possible confusion with other species such as the five-spot burnet). Occasionally, the spots are yellow or even black. The hind wings are red with a blackish fringe. The larva is plump and hairy with variable markings, usually pale green with rows of black spots. It is an aposematic moth because it is distinguished by its colors as toxic to predators like birds and lizards. If attacked it emits a liquid containing cyanide.

The adults fly on hot, sunny days from June to August, and are attracted to a wide variety of flowers such as knapweed and scabious, as well as the larval food plants bird’s foot trefoil, Dorycnium, Coronilla and clover.

The species overwinters as a larva. The larva pupates in early summer in a papery cocoon attached to a grass stem. 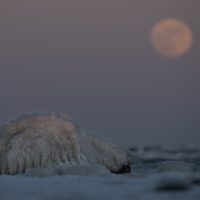