Song thrush – Turdus philomelos
is a thrush that breeds across much of Eurasia. It has brown upperparts and black-spotted cream or buff underparts and has three recognised subspecies. Its distinctive song, which has repeated musical phrases, has frequently been referred to in poetry.

The song thrush breeds in forests, gardens and parks, and is partially migratory with many birds wintering in southern Europe, North Africa and the Middle East; it has also been introduced into New Zealand and Australia. Although it is not threatened globally, there have been serious population declines in parts of Europe, possibly due to changes in farming practices.

The song thrush builds a neat mud-lined cup nest in a bush or tree and lays four or five dark-spotted blue eggs. It is omnivorous and has the habit of using a favourite stone as an “anvil” on which to break open the shells of snails. Like other perching birds (passerines), it is affected by external and internal parasites and is vulnerable to predation by cats and birds of prey.

The song thrush breeds in most of Europe (although not in the greater part of Iberia, lowland Italy or southern Greece), and across the Ukraine and Russia almost to Lake Baikal. It reaches to 75°N in Norway, but only to about 60°N in Siberia. Birds from Scandinavia, Eastern Europe and Russia winter around the Mediterranean, North Africa and the Middle East, but only some of the birds in the milder west of the breeding range leave their breeding areas.

It sounds like this
Recording by Ruslan Mazuryk from Xeno canto 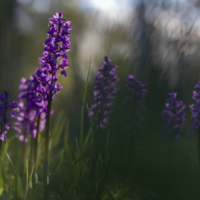