Spectacled warbler – Sylvia conspicillata
is a species in the typical warbler genus Sylvia. The genus name is from Modern Latin silvia, a woodland sprite, related to silva, a wood. The specific conspicillata is from Latin conspicillum, a place to look from, equivalent to “spectacled”.[2]

It breeds in north west Africa, southwest Europe from Iberia to Italy, and then further east on the eastern Mediterranean islands and coastal regions. It is mainly resident in Africa, but other populations migrate to winter in more widely in north and west Africa and Egypt. This bird is a rare vagrant to northern and western Europe.

hese are very small “warblers” and are intermediate between whitethroats and Tristram’s warbler in coloration. Spectacled warblers are brown above and buff below, with chestnut wing patches and a white throat. Adult males have a grey head and the white eye ring which gives the species its name. Immature birds can be confused with both the whitethroat and the subalpine warbler, and identification is difficult in the field. The song is a fast high warble.

It sounds like this
Recording by Egidio Fulco from Xeno canto 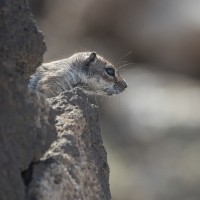