Ural owl – Strix uralensis
is a medium-sized nocturnal owl of the genus Strix, with up to 15 subspecies found in Europe and northern Asia.

The Ural owl is smaller than the great grey owl, and much larger than the tawny owl, which it superficially resembles. Distinguishing features apart from the size are the pale, buffish grey-brown plumage, with copious dark brown streaking on the back of the head and underparts. It has a round head with plain buffish-grey facial discs, orange-yellow bill and small black eyes. The tail is long and wedge-shaped, with dark barring on the upper tail, and the wings are rounded. Flight is direct and purposeful, recalling that of the common buzzard. Sexes are similar, with no seasonal variation.

The northern populations of the Ural owl occupy similar habitat to the great grey owl, nesting in lowland forests but avoiding dense areas, especially those of purely conifers. In central Europe it is an upland species, preferring deciduous woodland. It usually occupies open woodland and is more often found in moist rather than dry areas. It nests in hollow tree trunks, occasionally in old raptor nests, and increasingly in nestboxes. It normally lays two to four eggs, which hatch after 27–34 days. The young leave the nest after about four weeks, but will not fly until about six weeks old. It is a very aggressive owl, chasing other birds of prey from its territory, and it will attack human intruders, especially when young are present.

It sounds like this
Recording by Jelmer Poelstra from Xeno canto 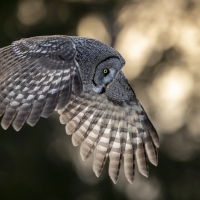