whooper swan – Cygnus cygnus
The whooper swan is similar in appearance to the Bewick’s swan. It is larger, however, at a length of 140–165 cm and a wingspan of 205–275 cm. Weight typically is in the range of 7.4–14 kg with an average of 9.8–11.4 kg for males and 8.2–9.2 kg for females. The verified record mass was 15.5 kg (34 lb) for a wintering male from Denmark. It is considered to be amongst the heaviest flying birds. Among standard measurements, the wing chord is 56.2–63.5 cm the tarsus is 10.4–13 cm and the bill is 9.2–11.6. It has a more angular head shape and a more variable bill pattern that always shows more yellow than black (Bewick’s swans have more black than yellow).

When whooper swans prepare to go on a flight as a flock, they use a variety of signaling movements to communicate with each other. These movements include head bobs, head shakes, and wing flaps and influence whether the flock will take flight and if so, which individual will take the lead. Whooper swans that signaled with these movements in large groups were found to be able to convince their flock to follow them 61% of the time. In comparison, swans that did not signal were only able to create a following 35% of the time. In most cases, the whooper swan in the flock that makes the most movements (head bobs) is also the swan that initiates the flight of the flock – this initiator swan can be either male or female, but is more likely to be a parent than a cygnet.[9] Additionally, this signaling method may be a way for paired mates to stay together in flight. Observational evidence indicates that a swan whose mate is paying attention to and participates in its partner’s signals will be more likely to follow through with the flight. Thus, if a whooper swan begins initiating flight signals, it will be less likely to actually carry through with the flight if its mate is not paying attention and is therefore less likely to join it.

They are very noisy; the calls are strident, similar to those of Bewick’s swan but more resonant and lower-pitched on average: kloo-kloo-kloo in groups of three or four.

It sounds like this
Recording by Teet Sirotkin from Xeno canto 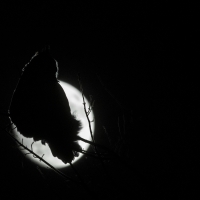 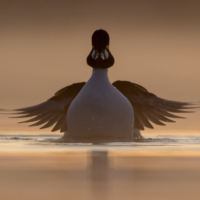