Antarctic fur seals appear to act alone when foraging and migrating. Males breed polygynously; a strong male may have more than a dozen female partners in a single season. Territories are established on breeding grounds in October to early November, when the musty-smelling males are extremely aggressive in defence of their harems. Females gestate for just over a year – giving birth in November or December. Pups are weaned at about four months old. Juveniles may then spend several years at sea before returning to begin their breeding cycles.

The usual food supply is krill and fish, of which each Antarctic fur seal eats about a ton in a year. Due to the enormous and growing populations of these seals, their food is a significant proportion of South Georgia’s krill and fish stocks. 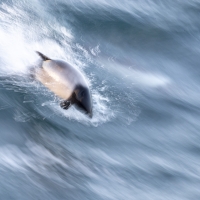