Asian desert warbler – Sylvia nana
is a typical warbler which breeds in the deserts of central and western Asia and the extreme east of Europe (Volga Delta area east to western Inner Mongolia in China), and migrating to similar habitats in southwestern Asia (Arabia to northwestern India) and the far northeast of Africa (Red Sea coastal regions) in winter. Until recently it was considered conspecific with the African desert warbler (and called just “desert warbler”), but is now given specific status. The two are still each other’s closest living relatives, and their relationships to other typical warblers are not clear. They may be fairly close to the whitethroat; particularly, female whitethroats look much like a richly coloured Asian desert warbler. But it seems that all these three taxa are fairly basal members of the genus.

It sounds like this
Recording by Oscar Campbell from Xeno canto 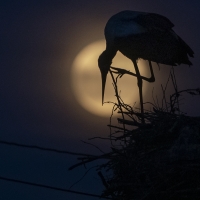