Collared flycatcher – Ficedula albicollis
The collared flycatcher  is a small passerine bird in the Old World flycatcher family, one of the four species of Western Palearctic black-and-white flycatchers. It breeds in southeast Europe (isolated populations in the islands of Gotland and Oland in the Baltic Sea, Sweden) and southwest Asia and is migratory, wintering in sub Sahara Africa. It is a rare vagrant in western Europe. It is the signature bird of Gotland. I have it yearly in my garden.

Listen to the song
Recording by Pascal Christe from xeno-canto 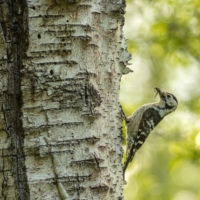