Lesser spotted woddpecker – Dryobates minor
Its habits are very similar to those of the great spotted woodpecker, and it has the same stumpy appearance, almost triangular, when bounding from tree to tree. Its note is a repeated “keek”, loud for so small a bird, and its vibrating rattle can with experience be distinguished from that of the larger species. This substitute for a song may be heard at all times, but most frequently when courtship begins early in the year. 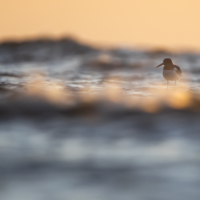