Corncrake – Crex crex
is a bird in the rail family. It breeds in Europe and Asia as far east as western China, and migrates to Africa for the northern hemisphere’s winter. It is a medium-sized crake with buff- or grey-streaked brownish-black upperparts, chestnut markings on the wings, and blue-grey underparts with rust-coloured and white bars on the flanks and undertail. The strong bill is flesh-toned, the iris is pale brown, and the legs and feet are pale grey. Juveniles are similar in plumage to adults, and downy chicks are black, as with all rails. There are no subspecies, although individuals from the east of the breeding range tend to be slightly paler than their western counterparts. The male’s call is a loud krek krek, from which the scientific name is derived. The corn crake is a medium-sized rail, 27–30 cm (11–12 in) long with a wingspan of 42–53 cm (17–21 in). Males weigh 165 g (5.8 oz) on average and females 145 g (5.1 oz). The adult male has the crown of its head and all of its upperparts brown-black in colour, streaked with buff or grey. The wing coverts are a distinctive chestnut colour with some white bars. The face, neck and breast are blue-grey, apart from a pale brown streak from the base of the bill to behind the eye, the belly is white, and the flanks, and undertail are barred with chestnut and white. The strong bill is flesh-coloured, the iris is pale brown, and the legs and feet are pale grey. 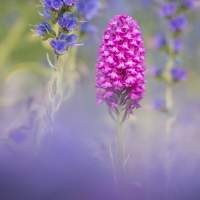 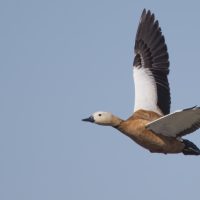