Ruddy shelduck – Tadorna ferruginea
known in India as the Brahminy duck, is a member of the family Anatidae. It is a distinctive waterfowl, 58 to 70 cm (23 to 28 in) in length with a wingspan of 110 to 135 cm (43 to 53 in). It has orange-brown body plumage with a paler head, while the tail and the flight feathers in the wings are black, contrasting with the white wing-coverts. It is a migratory bird, wintering in the Indian subcontinent and breeding in southeastern Europe and central Asia, though there are small resident populations in North Africa. It has a loud honking call.

The ruddy shelduck mostly inhabits inland water-bodies such as lakes, reservoirs and rivers. The male and female form a lasting pair bond and the nest may be well away from water, in a crevice or hole in a cliff, tree or similar site. A clutch of about eight eggs is laid and is incubated solely by the female for about four weeks. The young are cared for by both parents and fledge about eight weeks after hatching.

In central and eastern Asia, populations are steady or rising, but in Europe they are generally in decline. Altogether, the birds have a wide range and large total population, and the International Union for Conservation of Nature has assessed their conservation status as being of “least concern”.

It sounds like this
Recording by Hans Matheve from Xeno canto 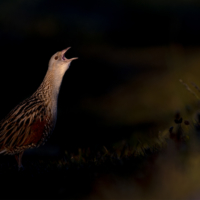