Eurasian curlew  – numenius arquata
is a wader in the large family Scolopacidae. It is one of the most widespread of the curlews, breeding across temperate Europe and Asia. In Europe, this species is often referred to just as the “curlew”, and in Scotland known as the “whaup” in Scots.

This is the largest wader in its range, at 50–60 cm (20–24 in) in length, with a 89–106 cm (35–42 in) wingspan and a body weight of 410–1,360 g (0.90–3.00 lb).[2] It is mainly greyish brown, with a white back, greyish-blue legs and a very long curved bill. Males and females look identical, but the bill is longest in the adult female. It is generally not possible to recognize the sex of a single Eurasian curlew, or even several ones as there is much variation; telling male and female of a mated pair apart is usually possible however.

The familiar call, from which this bird gets it name, is a loud curloo-oo.
Recording by Timo S. from Xeno canto 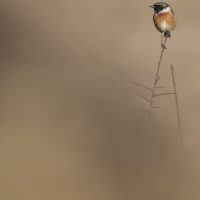