Tundra swan – Cygnus columbianus
is a small Holarctic swan. The two taxa within it are usually regarded as conspecific, but are also sometimes split into two species: Bewick’s swan (Cygnus bewickii) of the Palaearctic and the whistling swan (C. columbianus) proper of the Nearctic. Birds from eastern Russia (roughly east of the Taimyr Peninsula) are sometimes separated as the subspecies C. c. jankowskii, but this is not widely accepted as distinct, most authors including them in C. c. bewickii. Tundra swans are sometimes separated in the genus Olor together with the other Arctic swan species. 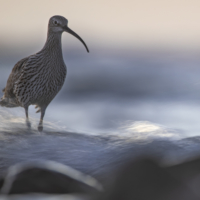