Eurasian woodcock – Scolopax rusticola
The Eurasian woodcock (Scolopax rusticola) is a medium-small wading bird found in temperate and subarctic Eurasia. It has cryptic camouflage to suit its woodland habitat, with reddish-brown upperparts and buff-coloured underparts. Its eyes are set far back on its head to give it 360-degree vision and it probes in the ground for food with its long, sensitive bill, making it vulnerable to cold weather when the ground remains frozen.

The male performs a courtship flight known as ‘roding’ at dusk in spring. When threatened, the female can carry chicks between her legs, in her claws or on her back while flying, though this is rarely witnessed. The world population is estimated to be 14 million to 16 million birds.

Adults are 33–38 cm (13–15 in) in length, including the 6–8 cm (2.4–3.1 in) long straight bill, and have a 55–65 cm (22–26 in) wingspan.[2] The Eurasian woodcock has cryptic camouflage to suit its woodland habitat, with intricately patterned reddish-brown upperparts and buff underparts. The head is barred with black, not striped like that of its close relatives, the snipe. It has large eyes located high on the sides of its head, giving it 360-degree monocular vision.

The wings are rounded and the base of the bill is flesh-coloured with a dark tip. The legs vary from grey to pinkish. The species is sexually dimorphic, with the male much larger than the female, although the sexes cannot be separated in the field.

It sounds like this
Recording by Romuald Mikusek from Xeno canto 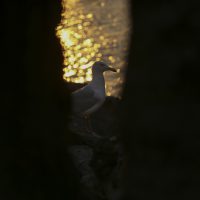