Light-mantled albatross – Phoebetria palpebrata
also known as the grey-mantled albatross or the light-mantled sooty albatross, is a small albatross in the genus Phoebetria, which it shares with the sooty albatross. The light-mantled albatross was first described as Phoebetria palpebrata by Johann Reinhold Forster, in 1785, based on a specimen from south of the Cape of Good Hope. The light-mantled albatross is largely sooty-brown or blackish, darker on the head, with paler upperparts from the nape to the upper tail-coverts which are grey to light grey, the palest on the mantle and back. The plumage has been described as being similar in appearance to the colouring of a Siamese cat.[7] The eyes are partly encircled with thin post-orbital crescents of very short grey feathers.[4] The bill is black with a blue sulcus[4][8] and a greyish-yellow line along the lower mandible, and is about 105 mm (4.1 in).[9] Measurements show that males and females are similar in size,[10] with average length of 79 to 89 cm (31–35 in, wing-span of 183 to 218 cm (72–86 in), and weight of 2.5 to 3.7 kg (5.5–8.2 lb).

They have a loud shrill voice that is trumpet-like, and when threatened will snap their bills or utilize a throaty “gaaaa”. When courting, they will utilize aerial displays and formation flying. They will also use mutual calling with deviations in tone brought occurring by head positioning, and finally, they use their tail in displays more than other albatrosses. 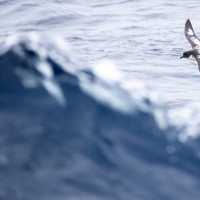