Snow petrel – Pagodroma nivea
is the only member of the genus Pagodroma. It is one of only three birds that breed exclusively in Antarctica and has been seen at the Geographic South Pole. It has the most southerly breeding distribution of any bird besides the south polar skua.[citation needed]

The snow petrel, Pagodroma nivea, is a small, pure white fulmarine petrel with black underdown, coal-black eyes, small black bill and bluish gray feet.[9] Body length is 36 to 41 cm (14–16 in) and the wingspan is 76 to 79 cm (30–31 in). Flight is more fluttering than most petrels. They are known to live 14 to 20 years.[citation needed]

The snow petrel is the only member of the genus Pagodroma, and a member of the subfamily fulmarine petrels. They, in turn, are all members of the family Procellariidae, and the order Procellariiformes. They all share certain identifying features. First, they have nasal passages that attach to the upper bill called naricorns. The bills of Procellariiformes are also unique in that they are split into seven to nine horny plates. They produce a stomach oil made up of wax esters and triglycerides that is stored in the proventriculus. This can be sprayed out of their mouths as a defense against predators (principally skuas) and as an energy-rich food source for the chicks and for the adults during their long flights. Finally, they also have a salt gland situated above the nasal passage which helps desalinate their bodies, due to the high amount of ocean water that they imbibe. It excretes a high saline solution from their nostrils. 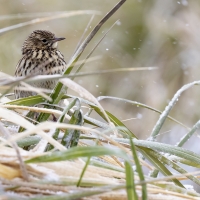