Southern rockhopper penguin – Eudyptes chrysocome
are two subspecies of rockhopper penguin, that together are sometimes considered distinct from the northern rockhopper penguin. It occurs in subantarctic waters of the western Pacific and Indian Oceans, as well as around the southern coasts of South America. This is the smallest yellow-crested, black-and-white penguin in the genus Eudyptes. It reaches a length of 45–58 cm (18–23 in) and typically weighs 2–3.4 kg (4.4–7.5 lb), although there are records of exceptionally large rockhoppers weighing 4.5 kg (9.9 lb). It has slate-grey upper parts and has straight, bright yellow eyebrows ending in long yellowish plumes projecting sideways behind a red eye.

Their common name refers to the fact that, unlike many other penguins which get around obstacles by sliding on their bellies or by awkward climbing using their flipper-like wings as aid, rockhoppers will try to jump over boulders and across cracks.

This behaviour is by no means unique to this species however – at least the other “crested” penguins of the genus Eudyptes hop around rocks too. But the rockhopper’s congeners occur on remote islands in the New Zealand region, whereas the rockhopper penguins are found in places that were visited by explorers and whalers since the Early Modern era. Hence, it is this particular species in which this behaviour was first noted.

Their breeding colonies are located from sea-level to cliff-tops and sometimes inland. Their breeding season starts in September and ends in November. Two eggs are laid but only one is usually incubated. Incubation lasts 35 days and their chicks are brooded for 26 days.

The southern rockhopper penguin group is classified as vulnerable by the IUCN. Its population has declined by about one-third in the last thirty years. 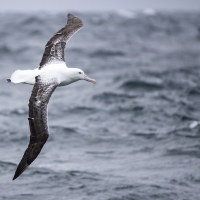 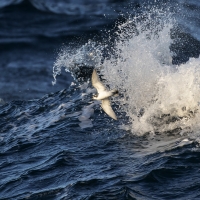