The Antarctic tern – Sterna vittata
is a typical tern. It ranges throughout the southern oceans. It is very similar in appearance to the closely related Arctic tern, but is stockier, and the wing tips are grey instead of blackish in flight. It is in breeding plumage in the southern summer, when the Arctic tern has moulted to its non-breeding plumage (though this is not useful for separating it from another species, the South American tern).

Breeding takes place from mid-November to early December. Chicks hatch from December to February. Skuas and jaegers are the primary predators of the bird’s eggs and young.

The total global population of this bird is around 140,000 individuals.

The Antarctic tern is a small bird at 31–38 cm (12-15 inches) long. Its bill is usually a dark red or blackish. It is mainly pale grey and white, but has a black cap when breeding. In non-breeding plumage it has a grizzled crown and white forehead. The tips of this tern’s wings are greyish black.

The plumage of juveniles is white on the belly, foreneck, forehead, and breast. The back is grey and the bill is black. Immature birds have plumage similar to adult terns.

It sounds like this
Recording by Sander Lagerveld from Xeno canto 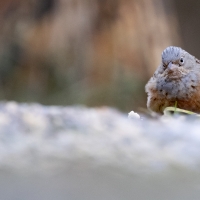