The black-necked grebe – Podiceps nigricollis
known in North America as the eared grebe, is a member of the grebe family of water birds. It was described in 1831 by Christian Ludwig Brehm. There are currently three accepted subspecies, including the nominate subspecies. Its breeding plumage features a distinctive ochre-coloured plumage that extends behind its eye and over its ear coverts. The rest of the upper parts, including the head, neck, and breast, are coloured black to blackish brown. The flanks are tawny rufous to maroon-chestnut, and the abdomen is white. When in its non-breeding plumage, this bird has greyish-black upper parts, including the top of the head and a vertical stripe on the back of the neck. The flanks are also greyish-black. The rest of the body is a white or whitish colour. The juvenile has more brown in its darker areas. The subspecies californicus can be distinguished from the nominate by the former’s usually longer bill. 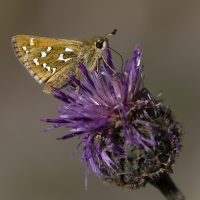