Bean goose – Anser fabilis
is a goose that breeds in northern Europe and Asia. It has two distinct varieties, one inhabiting taiga habitats and one inhabiting tundra. These are recognised as separate species by the American Ornithologists’ Union and the IOC (taiga bean goose and tundra bean goose), but are considered a single species by other authorities, such as the British Ornithologists’ Union. It is migratory and winters further south in Europe and Asia. The bean goose is a rare winter visitor to Britain. There are two regular wintering flocks of taiga bean goose, in the Yare Valley, Norfolk and the Avon Valley, Scotland. A formerly regular flock in Dumfries and Galloway no longer occurs there. The tundra bean goose has no regular wintering sites, but is found in small groups among other grey goose species – among the most regular localities are WWT Slimbridge, Gloucestershire and Holkham Marshes, Norfolk.

The Taiga bean geese Anser fabalis fabalis wintering in Europe are considered to migrate across three different flyways: Western, Central and Eastern; which has been confirmed by stable isotope analysis of their flight feathers.

It sounds like this
Recoding by Eetu Paljakka from Xeno canto 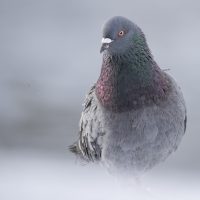 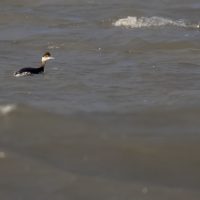