The yellow-billed teal – Anas flavirostris
is a South American species of duck. Like other teals, it belongs to the diverse genus Anas; more precisely it is one of the “true” teals of subgenus Nettion. It occurs in Argentina, the Falkland Islands, Chile, Peru, Bolivia, Uruguay, and Brazil.

It has also established itself in South Georgia, where it was first recorded breeding in 1971. It inhabits freshwater wetlands, preferring palustrine habitat to rivers. Considering its wide range and local abundance, it is not considered threatened by the IUCN. Mitochondrial DNA sequence data is most similar to that of the very different-looking green-winged teal.[note 1] Apart from the mystifying relationship with the red-and-green-headed teals, it altogether most resembles the Indian Ocean radiation of teals. However, the yellow-billed teal’s unicolored underside and namesake bill are unique, as is to be expected from a species that evolved half a world apart from Bernier’s or the grey teal.

This species is also unique among its relatives in some aspects of its post-copulation behavior: After dismounting, the drakes stretch themselves up high and swim around and alongside the females.

Traditionally, there are 2 subspecies:

Previously, this species and the Andean teal formed the superspecies speckled teal, but increasingly taxonomists consider the two species distinct. 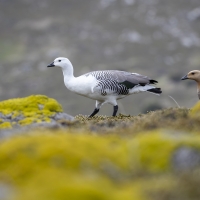 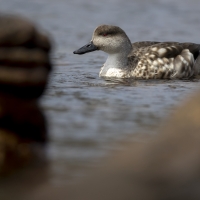