Thick-billed murre – Uria lomvia
or Brünnich’s guillemot. This bird is named after the Danish zoologist Morten Thrane Brünnich. The very deeply black North Pacific subspecies Uria lomvia arra is also called Pallas’ murre after its describer. The genus name is from Ancient Greek ouria, a waterbird mentioned by Athenaeus. The species term lomvia is a Swedish word for an auk or diver. The English “guillemot” is from French guillemot probably derived from Guillaume, “William”. “Murre” is of uncertain origins, but may imitate the call of the common guillemot.

Murres have the highest flight cost, for their body size, of any animal.

Adult birds are black on the head, neck, back and wings with white underparts. The bill is long and pointed. They have a small rounded black tail. The lower face becomes white in winter. This species produces a variety of harsh cackling calls at the breeding colonies, but is silent at sea.

They differ from the common murre in their thicker, shorter bill with white gape stripe and their darker head and back; the “bridled” morph is unknown in U. lomvia – a murre has either a white eye-stripe, or a white bill-stripe, or neither, but never both; it may be that this is character displacement, enabling individual birds to recognize conspecifics at a distance in the densely packed breeding colonies as the bridled morph is most common by far in North Atlantic colonies where both species of guillemots breed. In winter, there is less white on the thick-billed murre’s face. They look shorter than the common murre in flight. First year birds have smaller bills than adults and the white line on the bill is often obscure, making the bill an unreliable way to identify them at this age. The head pattern is the best way to distinguish first-year birds from common murres. 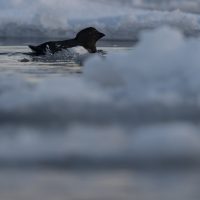 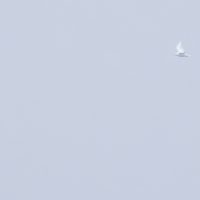