White-chinned petrel – Procellaria aequinoctialis
or Cape hen, is a large shearwater in the family Procellariidae. It ranges around the Southern Ocean as far north as southern Australia, Peru and Namibia, and breeds colonially on scattered islands.

The white-chinned petrel is a member of the Procellaria genus, and in turn is a member of the Procellariidae family, and the Procellariiformes order. As a member of the Procellariiformes, they share certain identifying features. First, they have nasal passages that attach to the upper bill called naricorns. Although the nostrils on the petrel are on top of the upper bill. The bills of Procellariiformes are also unique in that they are split into between seven and nine horny plates. They produce a stomach oil made up of wax esters and triglycerides that is stored in the proventriculus. This can be sprayed out of their mouths as a defence against predators and as an energy rich food source for chicks and for the adults during their long flights. Finally, they also have a salt gland that is situated above the nasal passage and helps desalinate their bodies, due to the high amount of ocean water that they imbibe. It excretes a high saline solution from their nose.

The white-chinned petrel measures 51–58 cm (20–23 in) in length, weighs 0.97–1.89 kg (2.1–4.2 lb) and spans 134–147 cm (53–58 in) across the wings. Not only is it the largest Procellaria petrel but is also the largest species in its family outside of the giant petrels. This large petrel is sooty-black and has some white on its throat and chin, more so in the Indian Ocean sector than the Atlantic. Its primaries can have a silvery appearance underneath. Its bill may be horn or yellow with a black tip, and also black between the nostrils. It has black feet. When it flies, it mixes slow wing beats with glides. Although normally quiet, it will rattle or groan while at its colony. 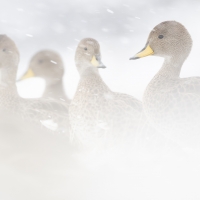 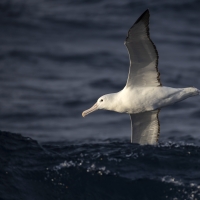