The yellow-billed pintail has a brown head and neck. The bill is yellow with a black tip and a black stripe down the middle. The tail is brownish and pointed. The upper wing is grayish-brown, and the secondaries are blackish-green. The rest of the body is buffish brown with varying size black spots. The species is sometimes confused with yellow-billed teal, but can be differentiated by the yellow stripes on its bill, its larger size and its tendency not to form large groups.

The range includes much of South America, the Falkland Islands and South Georgia. The nominate and smallest subspecies, the South Georgia pintail A. g. georgica, is thought to number between 1000 and 1500 pairs, and is found only in South Georgia. The Chilean, or brown, pintail A. g. spinicauda is widespread on the South American mainland from extreme southern Colombia southwards, as well as in the Falkland Islands, and numbers well over 110,000. Niceforo’s pintail A. g. niceforoi, formerly found in central Colombia, is believed to be extinct, having been last recorded in 1952 (and described only in 1946). Their habitat ranges from high elevation lakes and marshes to low elevation lakes and rivers and coasts in open country.

It sounds like this
Recording by Felix Vidaz from Xeno canto 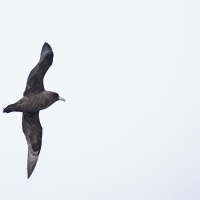