Wood lark – Lullula arborea
This is a 13.5- to 15-cm-long bird, slightly smaller than the skylark being roughly 20% shorter. The woodlark is mainly brown above and pale below, but with distinctive white superciliar meeting on the nape. It has a crest which is quite small and at most times inconspicuous. In flight it shows a short tail and short broad wings. The tail is tipped with white, but unlike the skylark, the tail sides and the rear edge of the wings are not edged with white.

As with many of the birds in the lark family, the woodlark is primarily vegetarian as an adult but during the breeding season will also eat medium-sized insects. The diet is mainly composed of seeds and such insects as beetles, flies and moths. During the breeding season, the female incubates the eggs in spells of approximately 45 minutes and intervals of eight minutes feeding.[ n Europe in 2004, the breeding population of woodlarks was estimated to number 1.3 million to 3.3 million breeding pairs. Europe accounts for 75-94% of the global population, meaning between 4.15 million and 13.2 million individuals in its world range.[19] Populations of woodlark have fluctuated across Europe, with specific figures available for Britain showing these fluctuations. An estimated 400 breeding pairs were present in England in 1981. A series of systematic national surveys found 241 pairs in 1986, which increased to 1633 pairs in 1997 followed by an 88% increase to 3064 pairs in 2007. The woodlark has been categorised by the IUCN Red List of Threatened Species as being of least concern, meaning that it is not currently threatened with extinction. 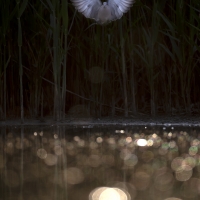