The wood warbler is a common and widespread leaf warbler which breeds throughout northern and temperate Europe, and just into the extreme west of Asia in the southern Ural Mountains. The genus name Phylloscopus is from Ancient Greek phullon, “leaf”, and skopos, “seeker” (from skopeo, “to watch”). The specific sibilatrix is Latin for “whistler”.

This warbler is strongly migratory and the entire population winters in tropical Africa.

This is a bird of open but shady mature woodlands, such as beech and sessile oak, with some sparse ground cover for nesting. The dome-shaped nest is built near the ground in low shrub. 6 or 7 eggs are laid in May; there may be a second brood. Like most Old World warblers, this small passerine is insectivorous. The wood warbler is 11–12.5 cm long, and a typical leaf warbler in appearance, green above and white below with a lemon-yellow breast. It can be distinguished from similar species, like the chiffchaff P. collybita and the willow warbler, P. trochilus by its yellow supercilium, throat and upper breast, pale tertial edges, longer primary projection, and by its shorter but broader tail.

It is a summer visitor to the United Kingdom, seen from April until August. It has declined there in recent years; it is now very rare in Ireland. 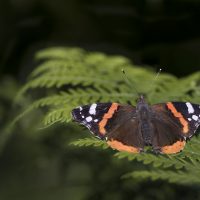