Firecrest – Regulus ignicapilla
The common firecrest (Regulus ignicapilla) also known as the firecrest, is a very small passerine bird in the kinglet family. It breeds in most of temperate Europe and northwestern Africa, and is partially migratory, with birds from central Europe wintering to the south and west of their breeding range. Firecrests in the Balearic Islands and north Africa are widely recognised as a separate subspecies, but the population on Madeira, previously also treated as a subspecies, is now treated as a distinct species, the Madeira firecrest, Regulus madeirensis. A fossil ancestor of the firecrest has been identified from a single wing bone. This kinglet is greenish above and has whitish underparts. It has two white wingbars, a black eye stripe and a white supercilium. The head crest, orange in the male and yellow in the female, is displayed during breeding, and gives rise to the English and scientific names for the species. This bird superficially resembles the goldcrest, which largely shares its European range, but the firecrest’s bronze shoulders and strong face pattern are distinctive. The song is a repetition of high thin notes, slightly lower-pitched than those of its relative. 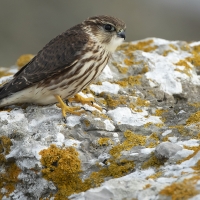