Merlin – Falco columbarius
is a small species of falcon from the Northern Hemisphere, with numerous subspecies throughout North America and Eurasia. A bird of prey once known colloquially as a pigeon hawk in North America, the Merlin breeds in the northern Holarctic; some migrate to subtropical and northern tropical regions in winter. Males typically have wingspans of 53–58 centimetres (21–23 in), with females being slightly larger. They are swift fliers and skilled hunters who specialize in preying on small birds in the size range of sparrows to quail. The Merlin has for centuries been well regarded as a falconry bird. In recent decades merlin populations in North America have been significantly increasing, with some merlins becoming so well adapted to city life that they forgo migration. The merlin is 24–33 cm (9.4–13.0 in) long with a 50–73 cm (20–29 in) wingspan.[14] Compared with most other small falcons, it is more robust and heavily built. Males average at about 165 g (5.8 oz) and females are typically about 230 g (8.1 oz). There is considerable variation, however, throughout the birds’ range and—in particular in migratory populations—over the course of a year. Thus, adult males may weigh 125–210 g (4.4–7.4 oz), and females 190–300 g (6.7–10.6 oz). Each wing measures 18.2–23.8 cm (7.2–9.4 in), the tail measures 12.7–18.5 cm (5.0–7.3 in) and the tarsus measures 3.7 cm (1.5 in). Such sexual dimorphism is common among raptors; it allows males and females to hunt different prey animals and decreases the territory size needed to feed a mated pair. 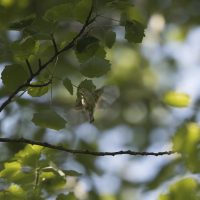