Orchis spitzelii
is a species of orchid found from Sweden (Gotland), eastern Spain to the Caucasus and northwestern Africa.

It is a rare and local species with a disjunct distribution from Sweden in the north, to Algeria in the south. In these southerly areas O. spitzelii is a montane orchid, rarely growing below 1000m, whereas in the most northerly parts of its range it may be found  at sea level. Its worth mentioning that Swedish populations (variety gotlandica) have been the subject of study in recent years and there are persistent doubts as to its native status in that country. Its range reaches Lebanon in the east where the species is represented by the variety asiatica. 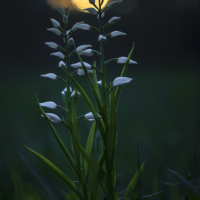