Snow bunting – Plectrophenax nivalis
The snow bunting sometimes colloquially called a snowflake, is a passerine bird in the Calcariidae family . It is an Arctic specialist, with a circumpolar Arctic breeding range throughout the northern hemisphere. There are small isolated populations on a few high mountain tops south of the Arctic region, including the Cairngorms in central Scotland and the Saint Elias Mountains on the southern Alaska-Yukon border, and also Cape Breton Highlands. The snow bunting is the most northerly recorded passerine in the world. The snow buntings migrate to the Arctic to reproduce and they are the first migrant species that arrives to these territories. They must gain at least 30% of body mass before migration. The males will arrive first at the beginning of April, when temperature could reach -30 degrees Celsius. This early migration could be explained by the fact that this species is highly territorial and the quality of the nesting area is crucial to their reproductive success. Females will arrive four to six weeks later, when the snow starts to melt. They tend to migrate in small flocks and have an undulate flight at a moderate height.

This passerine bird overwinters in northern temperate zones in open fields forming moving flocks. They will leave the Arctic at the middle and end of September, although some will start the migration at the beginning of November. The female leaves first and tends to winter in more southern territories than the male, while the juveniles will leave the Arctic even later than the adults. 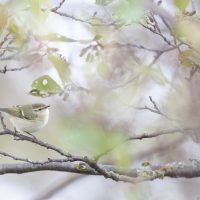 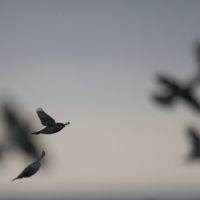