The woodpecker is a resident breeding bird from southeastern Europe east to Iran. Its range has expanded further northwest into Europe in recent years. It is an inhabitant of open woodlands, cultivation with trees and scrubs, and parks, depending for food and nesting sites upon old trees. It is often an inconspicuous bird, in spite of the plumage.

The woodpecker is 23 cm long, and is very similar to the great spotted woodpecker, Dendrocopos major. The upper parts of the male are glossy black, with a crimson spot on the nape and white on the forehead, sides of the face and neck. On the shoulder is a large white patch and the flight feathers are black with white spots forming three wingbars.

The three outer tail feathers show only a few white spots; these show when the short stiff tail is outspread, acting as a support in climbing. The under parts are buffish white, the abdomen and under tail coverts reddish. The long bill is slate black and the legs greenish grey. The female has no crimson on the nape, and in the young this nape spot is absent, but the crown is crimson. 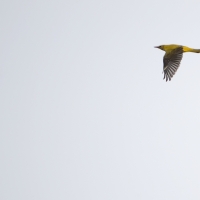