Western marsh harrier – Circus aeruginosus
is a large harrier, a bird of prey from temperate and subtropical western Eurasia and adjacent Africa. It is also known as the Eurasian marsh harrier. The genus name Circus is derived from the Ancient Greek kirkos, referring to a bird of prey named for its circling flight (kirkos, “circle”), probably the hen harrier. The specific aeruginosus is Latin for “rusty”. The western marsh harrier is 43 to 54 cm (17 to 21 in) in length, has a wingspan of 115 to 130 cm (45 to 51 in) and a weight of 400 to 650 g (14 to 23 oz) in males and 500 to 800 g (18 to 28 oz) in females. It is a large, bulky harrier with fairly broad wings, and has a strong and peculiar sexual dichromatism. The male’s plumage is mostly a cryptic reddish-brown with lighter yellowish streaks, which are particularly prominent on the breast. The head and shoulders are mostly pale greyish-yellowish. The rectrices and the secondary and tertiary remiges are pure grey, the latter contrasting with the brown forewing and the black primary remiges at the wingtips. The upperside and underside of the wing look similar, though the brown is lighter on the underwing. Whether from the side or below, flying males appear characteristically three-colored brown-grey-black. The legs, feet, irides and the cere of the black bill are yellow.

The female is almost entirely chocolate-brown. The top of the head, the throat and the shoulders have of a conspicuously lighter yellowish colour; this can be clearly delimited and very contrasting, or (particularly in worn plumage) be more washed-out, resembling the male’s head colours. But the eye area of the female is always darker, making the light eye stand out, while the male’s head is altogether not very contrastingly coloured and the female lacks the grey wing-patch and tail. Juveniles are similar to females, but usually have less yellow, particularly on the shoulders. 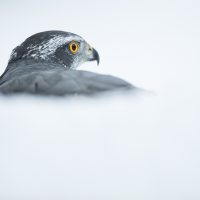